Hot Keywords:
Home » News » industry information » What is the working principle of capacitors?

What is the working principle of capacitors?

The capacitor has two electrodes like a battery. Inside the capacitor, the two electrodes are connected to two metal plates separated by a dielectric. The dielectric can be air, paper, plastic, or any other material that does not conduct electricity and prevents the two metal poles from coming into contact with each other. Using two pieces of aluminum foil and a piece of paper, you can easily make a capacitor. Although the capacitor made in this way has a problem with the storage capacity, it does work.

The capacitor in the electronic circuit is shown in the figure:

When connecting the capacitor and battery together: 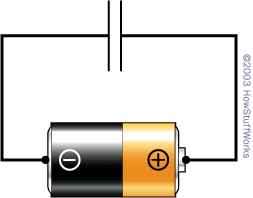 The metal plate on the capacitor connected to the negative electrode of the battery will absorb the electrons generated by the battery.

The metal plate on the capacitor connected to the positive electrode of the battery will release electrons to the battery.

After charging, the capacitor and the battery have the same voltage (if the battery voltage is 1.5 volts, the capacitor voltage is also 1.5 volts). Small capacitors have lower capacity, but large capacitors can hold a lot of charge. For example, a soda can-sized capacitor can hold enough charge to light a flashlight bulb for a few minutes. When you see the lightning in the sky, you see a huge capacitor, one of which is the dark cloud in the sky and the other is the earth, and lightning is the phenomenon of charge release between the two "poles" of the dark cloud and the earth. Obviously, such a huge capacitor can hold a lot of charge.

Next, connect the capacitor to the circuit: 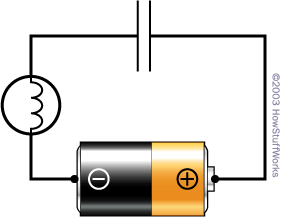 The 1 method capacitor is usually quite large. Depending on the voltage withstand capacity of the capacitor, it may be as large as a can of gold * fish or a 1 liter soda bottle. Therefore, capacitors are usually measured in microfarads (parts per million).

To understand how big the 1 method is, calculate this way:

A typical alkaline AA battery stores about 2.8 amp-hours of electricity. It means that an AA battery can produce 2.8 amperes of current for 1 hour at 1.5 volts (about 4.2 watt-hours, that is, an AA battery can make a 4 watt bulb continue to illuminate for a little more than an hour). For convenience of calculation, the voltage of the AA battery is counted as 1 volt. To store the energy of one AA battery in a capacitor, a capacitor with a capacity of 3,600 * 2.8 = 10,080 method is required, because 1 amp-hour is equivalent to 3600 amp-seconds. If the capacity of 1 method needs to be stored with a tuna-sized capacitor, then the size of one AA battery is very different from the size of the capacitor storing 10,080 method, which cannot be compared. Unless the voltage resistance of the capacitor is high, it is impractical to use a capacitor to store a large amount of energy.

The difference between a capacitor and a battery is that the capacitor can instantaneously discharge all of its power, while the battery takes several minutes to fully discharge its power. This is why the electronic flash on the camera uses a capacitor: the battery fully charges the flash capacitor in a few seconds, and then the capacitor discharges all the power stored in the flash tube almost instantaneously. This will make charged and large-capacity capacitors extremely dangerous. Therefore, there are warning messages on the flash and the TV to remind people not to open them at will. They all contain large-capacity capacitors that may cause fatal harm to the human body.

The use of capacitors in electronic circuits:

1) Sometimes, capacitors are used to store electricity for high-speed release. This function is used in the flash. Large lasers also use this technique to obtain very bright instant flash effects.

2) The capacitor can also eliminate pulsation. If the line conducting the DC voltage contains pulsations or spikes, the large-capacity capacitor can stabilize the voltage by absorbing the peaks and filling the valleys.