Understand the relative advantages of electrolytic capacitors and film capacitors

Capacitors can be used to provide important ride-through (or hold) energy, or to reduce ripple and noise in power conversion circuits. Choosing the correct type of capacitor can have a profound impact on the overall size, cost, and performance of the system. This article will discuss the advantages of film and electrolytic capacitors in some common applications.

Film capacitors have low ESR, so they have good ripple current handling capabilities, high surge voltage ratings and self-healing performance. They are powerful for many power regulation tasks in important applications such as electric vehicles, renewable energy, and industrial drives. competitor. Film capacitors are particularly suitable for occasions that do not require maintenance (or ride-through), such as power outages or peaks of line frequency fluctuations, and large high-frequency ripple currents need to be provided or absorbed under the premise of high reliability and low loss.

Film capacitors are also very suitable for applications running at high DC bus voltages to minimize resistance losses. Since aluminum electrolytic capacitors can only provide voltages up to about 550V, applications that work at higher voltages require multiple devices to be connected in series. After that, it is necessary to select capacitors with matching values to prevent voltage imbalance. This method It is expensive and time-consuming; or increase the voltage balance resistor, which will increase the additional energy loss and BOM cost.

On the other hand, when pure energy storage density (Joule/cm3) is the main parameter of concern, aluminum electrolytic capacitors are still a strong choice. One example is the commercial off-line power supply, which requires cost-effective large-capacity energy storage in order to maintain the DC output voltage in the event of a power failure, without the need for backup batteries. Appropriately lowering the rating can reduce the life and reliability issues of aluminum electrolytic capacitors.

However, in fact, aluminum electrolytic capacitors can only withstand an overvoltage of about 20%. If there is a higher overvoltage, damage will occur, while the film capacitor can withstand an overvoltage of up to about twice the rated voltage in a short time. As is usually encountered in practical applications, self-healing capabilities ensure a safer response to accidental overvoltages. In addition, film capacitors can achieve easier connection and installation, and because they are non-polarized products, there will be no reverse connection errors. They are usually enclosed in an insulated, very efficient rectangular "box" housing, which can be used for various electrical connections such as screw terminals, lugs, fastons or bus bars.

Table 1 compares the characteristics of commonly used film capacitor types. Polyesters can be used at low voltages, while polypropylene usually exhibits the lowest loss and highest reliability under high stress due to its low dissipation factor (DF) and high dielectric breakdown capability per unit thickness. DF is relatively stable and does not vary greatly with temperature and frequency. Segmented high crystalline metalized polypropylene can also be used, and can provide energy density equivalent to aluminum electrolytic capacitors. 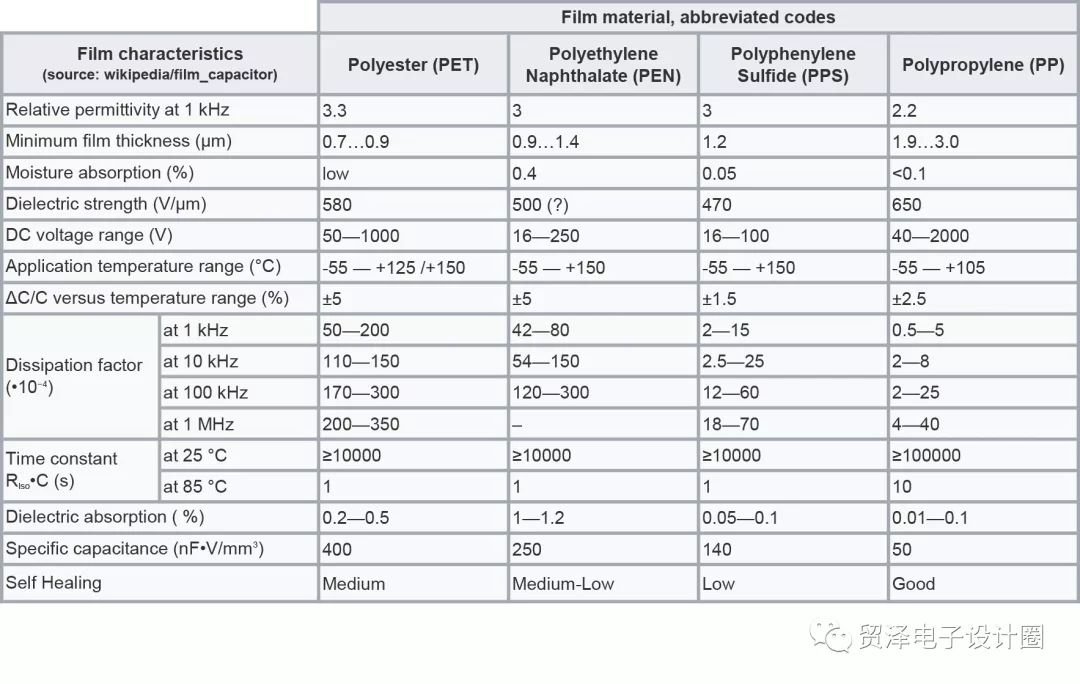 Table 1: Common types of film capacitors and their characteristics.

By analyzing some common power conversion circuits, it can be shown how the choice of different capacitor technology will deeply affect the size, weight and cost of the system, and it depends on whether the capacitor needs to be used for energy storage or processing ripple noise.

For example, for a large-capacity capacitor used as a 1kW offline converter, comparing electrolytic capacitors and film capacitors can clearly illustrate the difference in characteristics between these two types of capacitors. As shown in Figure 1, the converter has a power factor correction front end and a nominal DC bus voltage (Vn) of 400V. 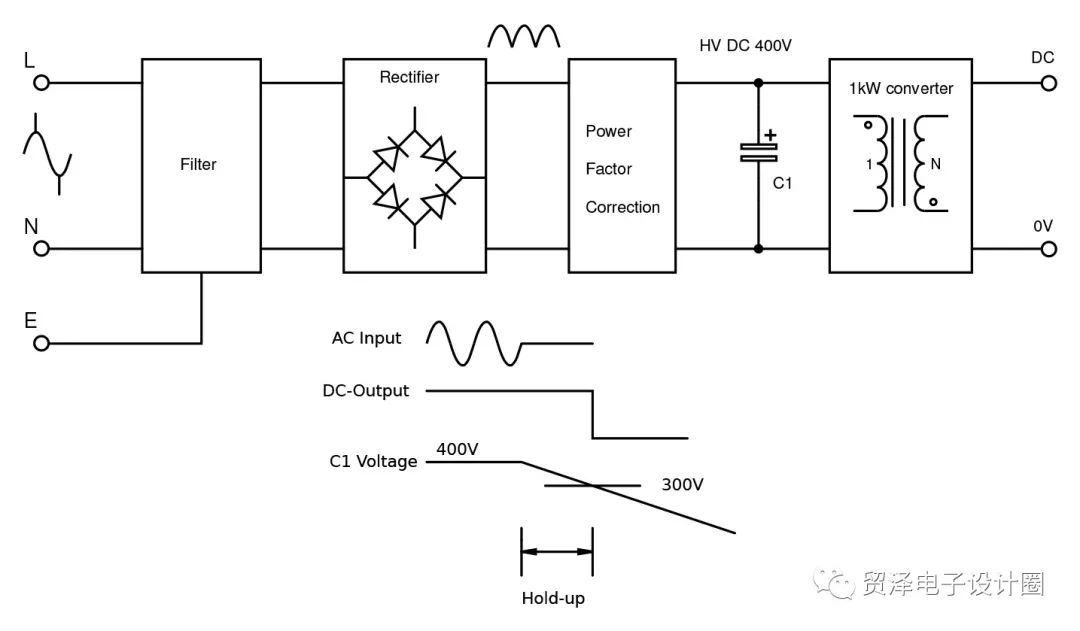 Assuming the efficiency is 90% and the voltage drop (Vd) is 300V, below this value, the output regulation function will be lost. In the event of a power failure, when the bus voltage drops from 400V to 300V, the large-capacity capacitor C1 provides energy to maintain a constant output power. We can calculate the value of C1 required for a 20ms ride-through before the voltage drops below 300V:

If only capacitors are needed to control the ripple voltage on DC lines such as electric vehicle power systems, the selection of capacitors will be significantly different. The bus voltage may be 400V as before, but it is powered by a battery, so there is no need for ride through. When the downstream converter draws 80Arms pulse current at a switching frequency of 20kHz, it is very realistic to limit the ripple to less than 4Vrms.

There are other reasons that make film capacitors the best choice. The parallel connection of multiple electrolytic capacitors leads to excessive capacitance, which may cause problems such as controlling the energy in the surge current. In addition, in light-load traction applications such as electric vehicles, DC connection transient overvoltage is common, and film capacitors perform more robustly.

As the preferred film capacitor:

The relative cost of film or electrolytic capacitors can be analyzed from the perspective of large-capacity storage or processing ripple capability. As shown in the results summarized in Table 2, data 1 published in 2013 compares the typical cost of a DC bus powered by a rectified 440VAC power supply:

Considering the above analysis, film capacitors are an excellent choice for filtering applications such as decoupling, switch buffering and EMI suppression or inverter output.

The decoupling capacitor configured on the DC bus of the inverter or converter provides a low-inductance path for high-frequency current circulation. The rule of thumb is to use about 1μF capacitor per 100A switch. It is worth noting that the connection to the capacitor should be as short as possible to avoid transient voltage. When the current is large and the frequency is high, the change range of 1000A/μs is possible. Considering that the PCB trace may have an inductance of about 1nH/mm, according to the following equation, a transient voltage of 1V per millimeter can be generated:

In the switch snubber circuit, a capacitor is connected in series with a resistor/diode combination and connected through a power switch (usually an IGBT or MOSFET) to control dV/dt, as shown in Figure 2. 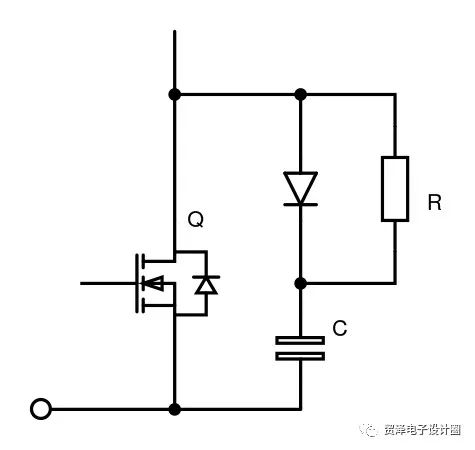 Snubber capacitors can reduce ringing, control EMI, and prevent false turn-on/off. The size of the snubber capacitor is usually selected to be approximately twice the sum of the switch output capacitor and the mounting capacitor, and the resistance value is selected to prevent all ringing as the standard.

As shown in Figure 3, film capacitors use their self-recovery and transient overvoltage capabilities, and can also be ideally used as X-type and Y-type capacitors to reduce differential mode and common mode noise respectively. The safety-level X1 (4kV) or X2 (2.5kV) capacitors are connected through the power cord, usually of polypropylene type, and the capacitance value is usually several μF, which needs to comply with the applicable EMC standards.

Y-type capacitors with low connection inductance are located where the input line is connected to ground. Here, the rated transient voltage of the Y1 or Y2 capacitor is 8kV and 5kV, respectively, and the input line is connected to the ground as shown in the figure. Leakage current considerations limit the capacitance that can be applied. Although the low connection inductance of the film capacitor helps to maintain high self-resonance, the external grounding system should be kept short. 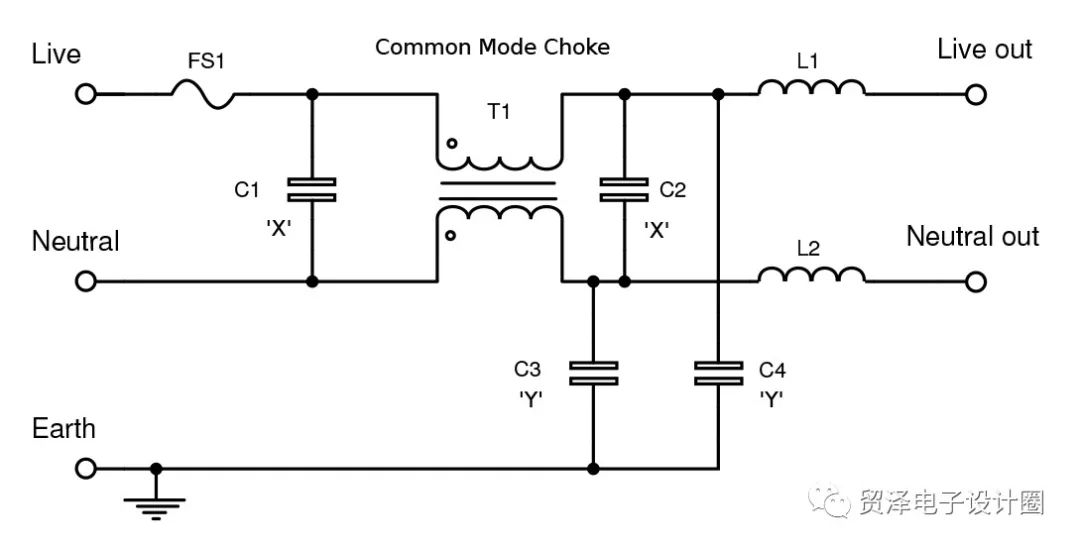 Figure 3: X-type and Y-type capacitors for EMI suppression. To

Non-polarized film capacitors and series inductors can usually be integrated in a single module, which can form a low-pass filter for attenuating high-frequency harmonics in the AC output of the drive and inverter (Figure 4). These are increasingly used to meet system EMC requirements and reduce the dV/dt-related stress on cables and motors, especially when the load is far from the drive unit. 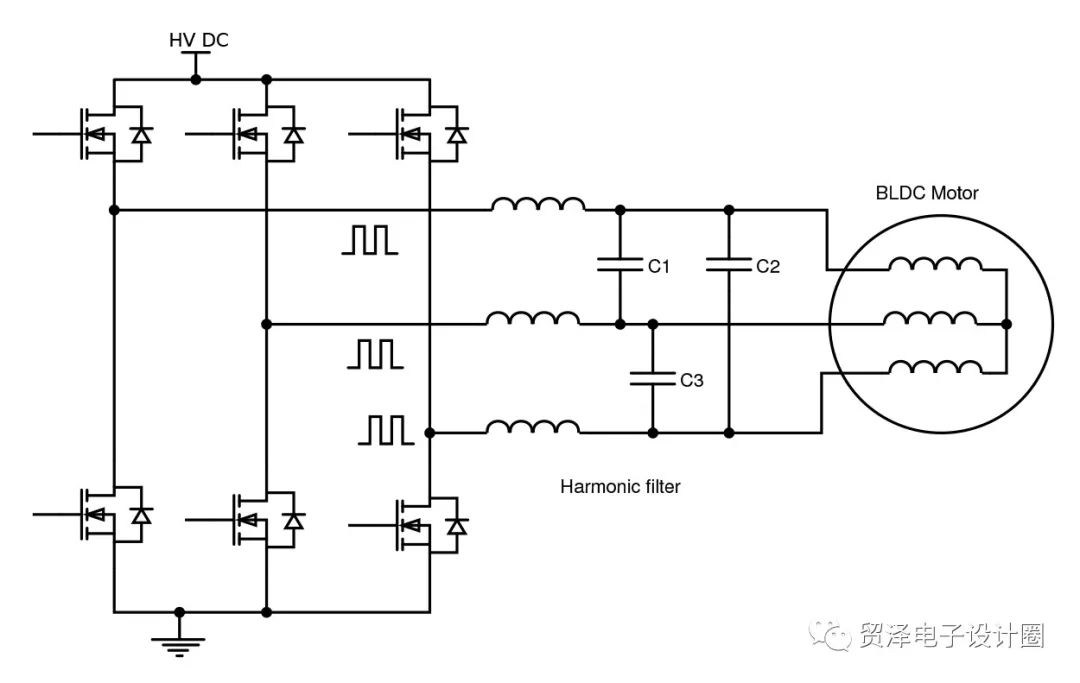 For power conversion applications, understanding the relative advantages of electrolytic capacitors and film capacitors can help designers make the right choice for achieving the best overall size, weight, and BOM cost. It can be briefly summarized as follows:

Low cost when used for "through" large capacity capacitors for DC bus voltage;

Self-repair improves the reliability and service life of the system;