The performance of capacitor standards from batch-by-batch inspection to periodic test are all four major parameters, namely capacitance, loss tangent value (hereinafter referred to as loss), insulation resistance and withstand voltage. The manufacturing process of capacitors is also closely focused on ensuring that the four parameters meet the requirements.

The influence of the manufacturing process of the metallized film capacitor on the four parameters:

Process factors that lead to deviations in capacitance during the manufacturing process:

ε is the dielectric constant of the medium;

s is the effective area of the plate;

d is the thickness of the medium;

Although precise regulations have been made, these three parameters will change during the process, resulting in capacity deviations. The focus of manufacturing is to reduce these deviations and improve the capacity hit rate.

There are errors in the width, thickness or margins of the film;

The change of the tension of the film from the large circle to the small circle, the tension error of each winding machine;

The pressure of the roller is too small. Deviation during winding process, wrong edge error;

When the air humidity is high, the core capacity is too large;

The thickness error of the core is not uniformly stressed, resulting in uneven core tightness and capacity dispersion;

The hot pressing plate is uneven;

In the traditional production process, metallized plastic film capacitors are made by winding a pair of films on a plastic core rod and then wrapping the capacitor with an insulating sleeve. 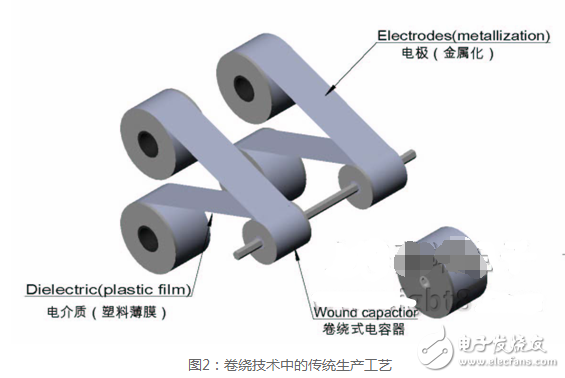 2. Rated voltage UN, and ripple voltage Ur (as shown below).

Rated DC voltage UNDC: The highest operating peak voltage that can be operated continuously in either polarity of the non-repetitive waveform used in the design of capacitors.

3. Aperiodic surge voltage Us: The peak voltage caused by switching or any other disturbance in the system. This voltage is only allowed to appear a limited number of times and its duration is shorter than the basic period.

5. Insulation voltage Ui: The root mean square value of the sine wave voltage designed for the insulation between the capacitor terminal and the shell or the ground.

8. Maximum surge current Is: The non-repeatable peak current caused by switching or any other disturbances in the system. This current is only allowed to appear a limited number of times and its duration is shorter than the basic period.

9. Series resistance Rs: Under specified operating conditions, the effective ohmic resistance of the conductor of the capacitor.

10. Equivalent series resistance Resr: an effective resistance, when it is connected in series with an ideal capacitor with the same capacitance value of the capacitor under discussion, under the specified operating conditions, the power loss of the resistor will be equal to the dissipation in the capacitor Active power.

11. Capacitor loss tangent tan δ: The ratio between the equivalent series resistance of the capacitor and its capacitive reactance under the specified sinusoidal AC voltage, frequency and temperature.

12. Capacitor loss: the active power consumed in the capacitor.

15. Conditions of steady state: the thermal balance reached by the capacitor under constant output and constant cooling air temperature.

1. To accurately determine the central value of the winding capacity (also called the correction value), the change rate of the process capacity of hot (cold) pressing, heat treatment and encapsulation must be included in the core capacity correction value. Different models, different specifications and even different winding machines have different correction values;

2. The capacity and height of the core are regularly measured during the winding process to control the discreteness of the capacitance;

3. After sampling the core capacity after flattening and shaping, if the deviation is found, adjust the winding center value in time.

4. Tracking the distribution status of finished product capacity, and timely feedback when found out of tolerance to adjust the capacity correction value;

The law of volume change in finished product storage and corresponding measures:

There are several solutions:

1. After encapsulation, the product undergoes another heat treatment.

2. After encapsulation, store it naturally for one week before testing.

3. Control the deviation value during the test according to the change law, such as the polyester capacitor is clamped in the positive deviation, and the negative deviation is relaxed. 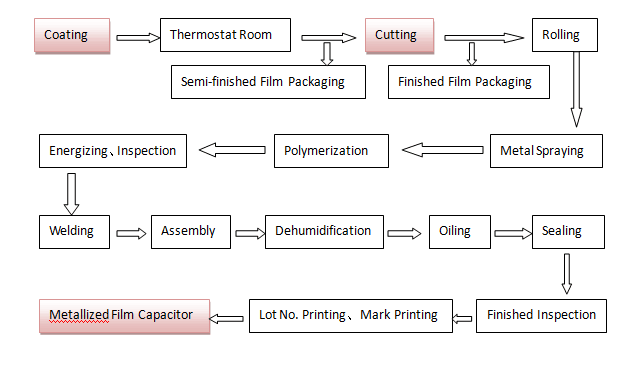