Capacitors often appear as an afterthought in many design situations and are added to the circuit to clean up the signal and power supply. In signal acquisition, capacitors play a more central role in the filtering of external sources and the sampling and holding stage of the analog/digital converter. However, in energy harvesting applications, capacitors provide a key component for accumulating charge from a low-energy environmental source and quickly and effectively releasing the stored charge into the load. In these applications, capacitor characteristics and component selection become important factors in the design.

In the traditional role in circuit design, capacitors are considered constant capacitance elements used for filtering, decoupling, and any other familiar uses of these devices. For these purposes, the difference between the characteristics of ideal capacitors and the characteristics of actual capacitors generally does not greatly affect their ability to fully fill their role. However, for energy harvesting applications, deviations from ideal capacitors significantly affect the efficiency of the overall design.

In the common effect (Figure 1), equivalent series resistance (ESR) and leakage current occupy an array of non-ideal characteristics, which can reduce efficiency. High ESR causes the capacitor to dissipate power, especially when subjected to high AC currents. Therefore, the use of low ESR capacitors results in a higher overall efficiency of the energy harvesting subsystem. Leakage current exerts a more profound impact in designs that use very low-energy environmental sources and rises as a significant limitation of the ability to apply more common types of capacitors in energy harvesting designs.

For any capacitor, the amount of leakage current depends on various factors, varying with time, voltage, and temperature (Figure 2). From the moment it is fully charged, the capacitor initially exhibits a relatively large current until it finally reaches a lower constant value. As a result of the time required to reach this constant level, industrial practice often relies on the measurement of leakage current after only a few minutes. Due to the difficulty of quantifying the non-ideal behavior of capacitors, some manufacturers combine leakage current, ESR, and ESL into a single value called the dissipation factor, which is defined as the energy consumed per cycle and the energy stored per cycle The ratio of energy, that is, the measured value. The reason for the low efficiency of capacitors. 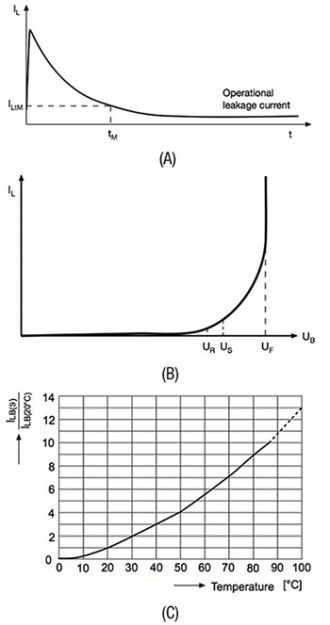 Figure 2: Leakage current in a capacitor depends on many factors, including time (A), voltage (B) and temperature (C).

The leakage current also increases with the operating voltage (UB in Figure 2B); as the applied voltage exceeds the rated voltage (UR in Figure 2B), it rises significantly and passes through the surge voltage U.S., the final capacitor anode pre-formed voltage ( UF in Figure 2B). At levels above the surge voltage, physical and chemical reactions occur in the capacitor. As a result, capacitors generally do not operate at levels above the rated voltage. Finally, due to the effect of temperature on the physical and chemical reactions in the capacitor, the leakage current can increase as the ambient temperature increases.

Leakage current is characteristic of all capacitor types, but some types have traditionally exhibited greater leakage current than others. For example, electrolytic capacitors are still the working horse of design, but their leakage characteristics have been used in designs that limit power budgets. Providing high capacitance and the ability to handle high voltages and currents, electrolytic capacitors have played the role of basic decoupling or filtering components in traditional design work, and are used in the power regulation stage of solar inverters.

In the past, electrolytic capacitors exhibited significant leakage current, which largely excluded their use in energy harvesting from weak energy sources. However, today, advances in materials science and manufacturing have enabled manufacturers to provide tantalum-MnO2 capacitor lines that exhibit lower leakage current.

Although more advanced tantalum electrolytic capacitors can meet the efficiency requirements in energy harvesting designs, other capacitor technologies such as film capacitors and ceramic capacitors provide a combination of small package size and performance efficiency (Figure 3). As ESR decreases, these devices typically have longer lifetime ratings and lower leakage currents than comparable electrolytes. 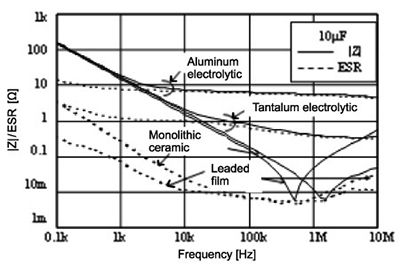 Figure 3: The impedance Z and equivalent series resistance (ESR) of a capacitor can vary significantly between frequency and capacitor type.

Although supercapacitors provide superior energy density, their characteristic curves can be more complicated. Supercapacitors combine multiple capacitors, and each capacitor can provide a relatively significant total leakage current for a particular device (Figure 4). Therefore, designers can find that they need to accept the degree of energy loss due to leakage current in order to obtain a very high density energy storage capacity with these components.

Figure 4: A super capacitor is composed of multiple capacitors (A), each of which contributes to the overall leakage current (B).

In summary, unlike traditional applications, designs that obtain energy from low-energy environmental sources require components that consume very little power during operation. Although designers may have failed electrolytic capacitors in the past due to their relatively high leakage current, manufacturers now provide electrolytic capacitors with characteristics that match many energy harvesting applications. Although alternative technologies such as film capacitors and ceramic capacitors provide improved characteristics, compact size and high capacitance, supercapacitors provide high energy density at the cost of high leakage and ESR.