2. The role of "DC support" and "DC-Link" capacitors

The second function of the "DC-Link" capacitor is to prevent the voltage overshoot and instantaneous overvoltage from the "DC-Link" from affecting the inverter.

However, when the load is a switching power converter, the switching power converter will take the ripple power at the switching frequency from the dc bus. If this current flows into the dc bus and the parasitic inductance on the ac side, it will produce ripple voltage at the switching frequency that cannot be tolerated. From this point of view, the dc power supply is no longer only providing dc current, but needs to provide pulse current with rich ac components. At this time, the dc power supply not only needs low dc internal resistance, but also needs to have good low impedance in a very wide frequency band width. However, this wide-band low-impedance will not be provided as a dc power supply for the rectifier. In order to obtain a good wide-band low-impedance, a capacitor with good performance must be used. Utilize the characteristic that the capacitor voltage cannot jump and the capacitance of the capacitor decreases with the increase of frequency, the capacitor is used to reduce the ac impedance of the dc bus.

From this perspective, the capacitor connected in parallel to the three-phase bridge rectifier or 12-phase rectifier output DC bus is no longer a smoothing voltage filter capacitor, but a power bypass capacitor, or known as "DC support", "DC-link" capacitor.

It can be concluded from the above description that the function of the DC support capacitor is to provide a “non-inductive” DC “power” to the load when the load current fluctuates, eliminating the inestimable and large parasitic inductance between the switch and the power supply. The resulting undesirable induced TV voltage spikes.

Although this solution may be optimal, the price may be very high, and general applications will not accept it. So, is there a better solution? The conclusion is that there are several low-cost and high-performance solutions.

Some capacitor manufacturers believe that the price of 2µF per RMB is absolutely impossible to manufacture, and some capacitor manufacturers believe that it is achievable after careful calculation. If there is enough capacitance and the price is close to or lower than aluminum electrolytic capacitors, such a solution will be better. When film capacitors are needed to replace aluminum electrolytic capacitors, they should be replaced according to the replacement ratio of small capacity. 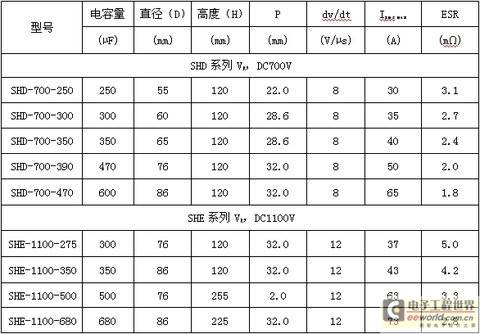 As can be seen from Table 1, EACO's SHD series DC-Link single-sided metallized polypropylene film capacitors can withstand very high ripple currents and are basically not limited by operating temperature.For example: SHD-700-300 polypropylene film capacitor with 300µF/700V has a current withstand capacity of 50A, and it can reach 100A when two are connected in parallel.Far higher than 3900µF/400V aluminum electrolytic capacitor can withstand about 15A ripple current value, higher than 15kW inverter "filter" capacitor needs to "filter" about 60A rectifier filter and inverter generated switch ripple current.From this data, aluminum electrolytic capacitor heating is inevitable, and the life is short.